Show in other currency
[close window]

Updated: Oct 5, 2022 22:15 GMT - refresh
This page is frequently updated.
The most recent quakes (above magnitude 2 for the past few hours, larger magnitudes for the rest of the past day, to limit the number to about 100 per day) are shown below with detail links for each quake.
We use multiple data sources from all over the world (currently over 20 different national and international agencies), and prioritize them in the following descending order: national institutes / agencies - USGS - EMSC - GFZ. Where data from different agencies for the same earthquake is available, you can find and compare the often differing data for magnitude, depth etc. in the detail page for each quake.
If you are looking for smaller and/or earthquakes in a specific region, you can look them up on the pages of specific countries or regions. Otherwise, there would be hundreds or thousands of earthquakes shown here.

Earthquakes Today: latest quakes worldwide in the past 48 hours on Wednesday, October 5, 2022 - list, stats and map

Quakes in the past 48 hours:

Earthquake Catalog - Look up past earthquakes

Look up past earthquakes in this area by date or date range:

When was the latest earthquake anywhere in the world?

Where did the last earthquake happen in the world?

The last quake above magnitude 4 today occurred 44 minutes ago 42 km SE of Khorugh, Gorno-Badakhshan, Tajikistan.
Smaller quakes below magnitude 4 are much more frequent and happen somewhere in the world every few minutes. However, many (if not most) of them go unrecorded, because not all areas in the world are covered by sensitive-enough seismic networks able to detect them.

Where do most earthquakes occur in the world?

By far, most earthquakes in the world occur along the margins of the Pacific Ocean, followed by the vast Alpine-Himalayan mountain belts that stretch from southern Europe through Turkey, the Caucasus, Iran, Pakistan, to northern India, Nepal and southern China.
Most of these regions are in oceanic or continental collision zones where tectonic plates collide with each other and release energy in form of earthquakes.

How many quakes were there in the world in the past 48 hours?

What was the strongest quake in the world in the past 48 hours?

What category of earthquake is considered an emergency?

Most earthquakes are small and cause no damage, but occasionally, there are bigger ones that can cause considerable damage to people and infrastructure. How much damage a quake does depends a lot on a number of factors including:
- magnitude
- depth beneath the surface
- duration and motion of the shaking
- local geology
- population density
- overall building standards of the affected area
- risk awareness and preparedness
Quakes below magnitude 5 rarely cause damage, while quakes above around magnitude 7 almost always result in extensive damage, even in areas with very good building standards such as in the western US or Japan. Quakes from magnitudes 8 often result in wide-spread or even catastrophic destruction.

What kind of damage can an earthquake do?

The ground shaking of earthquakes can cause soil liquefaction, landslides and avalanches, the opening of fissures in the ground, deformation of the ground, cracks in walls and other structures leading to their collapse. As secondary and often even more severe damage, this can lead to fires, gas leaks, or even tsunamis if the sea floor is moved in a way to displace a large mass of water.

How dangerous are earthquakes?

Earthquakes are among the (if not THE) most dangerous type of natural disaster.
According to data from the World Health Organization (WHO), quakes caused nearly 750,000 deaths globally in the period 1998-2017, more than half of all deaths related to natural disasters.

How many people are affected by earthquakes every year?

Each day, many thousands of people feel an earthquake somewhere. Stronger quakes can be felt by millions of people.
According to data from the World Health Organization (WHO), nearly 750,000 people were killed by quakes and more than 125 million people injured, made homeless or displaced or otherwise seriously affected by earthquakes during the 20 years from 1998-2017. 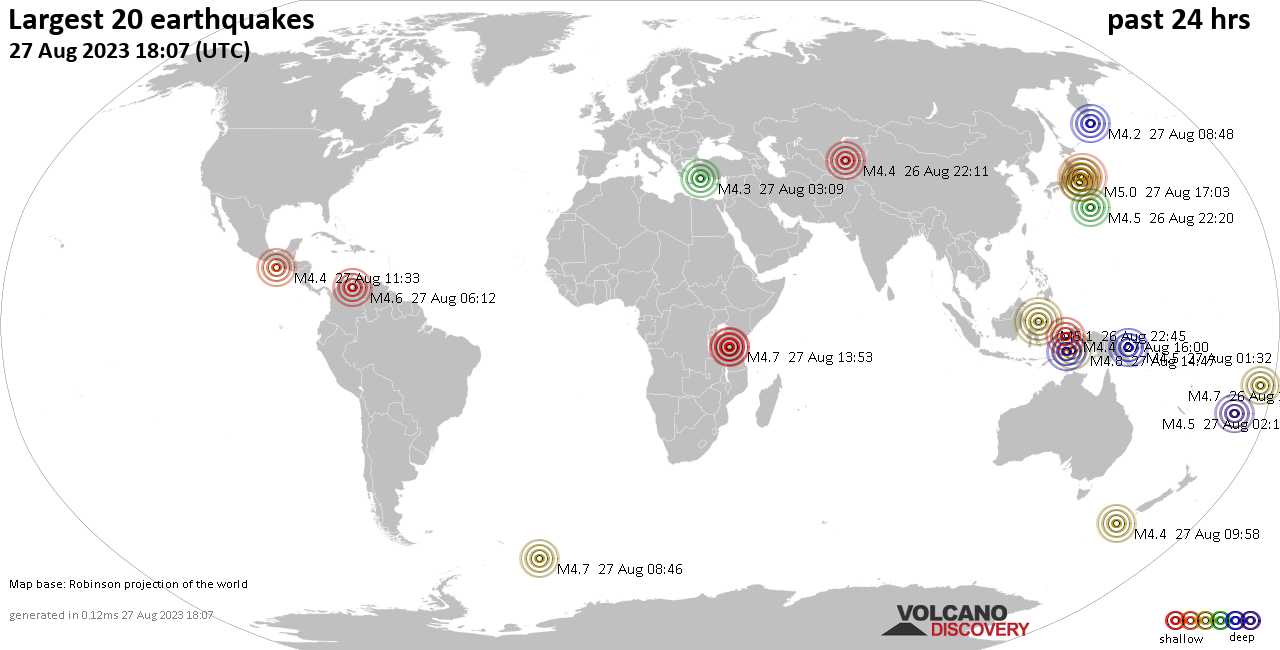 Has seismic activity increased or decreased? Check the Quake-O-Meter!
Number of earthquakes over time:
Past 24 hrs: 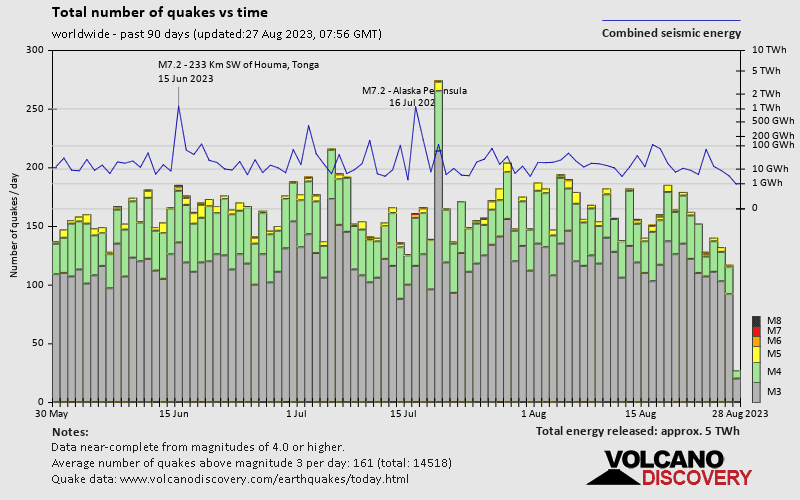 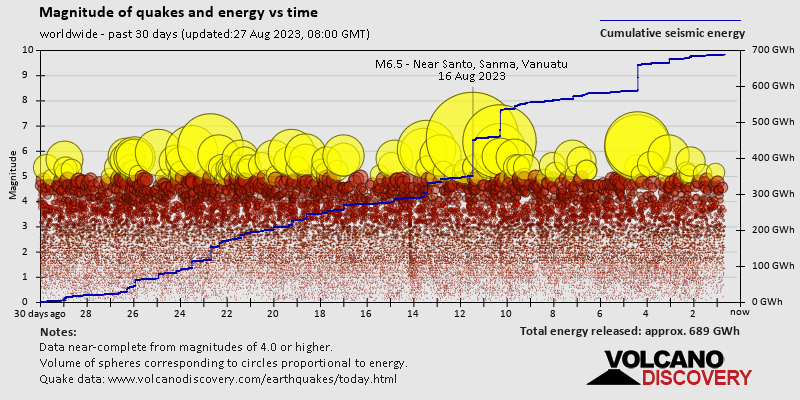 Find out more about recent and past earthquakes:

Quakes by country or region
Look up earthquakes in your country, region or state!
Seismic Activity Level

Check if seismic activity worldwide or in a specific area has increased or decreased!
Quakes near me

Earthquakes by Lat/Lon
Look up recent and past quakes worldwide or by selecting an area on the map!
Quake Reports

See all major earthquakes in the past month
Volcanic Quakes

Earthquakes near Volcanoes
Our world-wide map continuously detects shallow earthquakes near volcanoes. These could be early signs of unrest and often precede eruptions.
Try our free app!

Android | iOS version
Get the ad-free version!
Why is there advertising on this site?

Support us - Help us upgrade our services!

We truly love working to bring you the latest volcano and earthquake data from around the world. Maintaining our website and our free apps does require, however, considerable time and resources.
We need financing to increase hard- and software capacity as well as support our editor team. We're aiming to achieve uninterrupted service wherever an earthquake or volcano eruption unfolds, and your donations can make it happen! Every donation will be highly appreciated. If you find the information useful and would like to support our team in integrating further features, write great content, and in upgrading our soft- and hardware, please make a donation (PayPal or Online credit card payment).

Planned features:Thanks to your past donations, these features have been added recently:
Download and Upgrade the Volcanoes & Earthquakes app to get one of the fastest seismic and volcano alerts online:
Android | IOS
Thank you!
Sources: VolcanoDiscovery / VolcanoAdventures and other sources as noted.
Use of material: Most text and images on our websites are owned by us. Re-use is generally not permitted without authorization. Contact us for licensing rights.
Volcanoes & Earthquakes